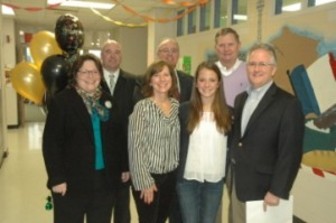 When Mike Nist and his wife, Julie, decided to start a foundation in their hometown of Tacoma, Wash., they didn't set out to create a million dollars in the first year. But the Nists have now given away more than half a million dollars, to the Greater Tacoma Community Foundation, the News Tribune reports.

The Nists' donation of $1 million is the largest ever by a single family in Washington state, the foundation says, and it's part of a larger effort by the Nists to give away $10 million in the state over the next five years.

"I think we saw as a family it is time to grow into something larger that will go on for many generations," Mike Nist tells the News Tribune.

The money will go toward a number of projects, including a new children's library in Tacoma, a scholarship for local high school students, and a scholarship for the University of Washington's journalism program.

The News Tribune notes that the Nists were among the first families to donate to the foundation, which was founded in 2000 and has raised more than $22 million since then.
Read the Entire Article